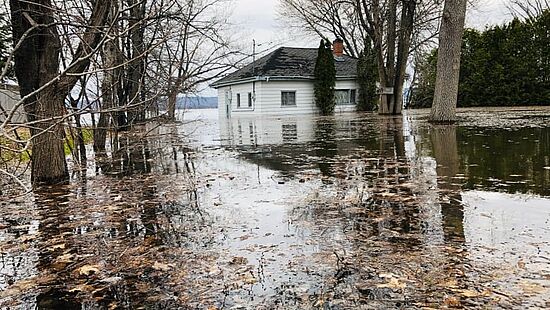 Recently on a TV interview on the Ontario floods, we were asked what exactly we wanted from the Province. It would be easy to just say ‘funding!’ because, yes, that is desperately needed. We’ve been at this job for quite awhile – our floodplain maps need to be updated, we have aging infrastructure and the conservation authorities have been under-resourced for years. But there’s actually more to it than just funding.

Basically, we need the Province to pull up a chair and take their seat at the watershed management table. We need them to continue to drive policy and contribute to improving Ontario’s watershed science because reducing the impacts of flooding isn’t just about dams and dykes, it’s about building local watershed resilience that helps to prevent flooding from happening in the first place.

Watershed Resilience is Needed to Reduce and Mitigate Flooding Impacts

Conservation authorities (CAs) are the ‘boots on the ground’ agencies who deliver watershed management programs that build watershed resiliency. Examples of some of the activities to achieve this include:

Conservation authorities and the Province have been in a partnership for a long time and it’s served Ontarians quite well. Back in the 1940s, the Province looked around at the extensive deforestation that was causing terrible water quality problems as a result of the flooding and erosion, and convinced municipalities that what we needed were conservation authorities – agencies whose mandate would be to restore watershed resilience in order to prevent and reduce the flooding and erosion.

One of the strengths of the CA partnership is the fact they are organized and deliver programs on a watershed-basis. Nature has no respect for municipal jurisdictions and water, in particular, easily crosses these lines as we’ve found this spring. Conservation authorities are well positioned to work with multiple municipalities who share flooding and other challenges.

Another advantage of conservation authorities is their ability to regulate development. After Hurricane Hazel blew through Ontario in 1954 killing 81 people and wiping out whole neighbourhoods along some of the river stretches, the Province understood that more needed to be done. Conservation authorities were given the ability to regulate floodplains (within their watersheds) in order to keep people and development away from swelling rivers and lakes. This had a huge impact on the success of Ontario’s flood programs. In regulated areas, conservation authorities work to keep development out of floodplains so people are safe and a lot of costly damages are avoided with this approach.

However, we are a province of lakes and rivers and we love to live as close to them as possible. As a result, as we can see in the media today, there are still buildings and people in flood-prone areas – they were there long before conservation authorities were regulating development or they’re in areas where conservation authorities don’t exist. What isn’t seen is where development in floodplains has been prevented.

Over the years, the partnership between the Province and conservation authorities went well beyond a funding relationship. Ontario’s watershed science has been built through the combined efforts of local and provincial scientists and other experts. Effective policy has been established to safeguard water resources, protect our farmland, improve water quality in the Great Lakes, create urban greenspaces and protect rural countryside. In doing so, the ripple effect has been safe and plentiful drinking water, lakes and rivers in which we can usually swim and fish, as well as healthy soils, growing forests and protected wetlands – all things we need to help us to adapt to climate change impacts, including increased flooding.

And yes, we need the funding. But just as important, we need the Province to stay at the table and share their expertise and to support the continuing development of watershed-wide science that supports local decision-making to prevent and reduce the growing and dangerous impacts of flooding.

Ontarians expect their government to have their backs, not just during and after a flood but in the long term to help prevent them from happening in the first place - and we feel that’s a fair expectation.

Back
Thanks for signing up!